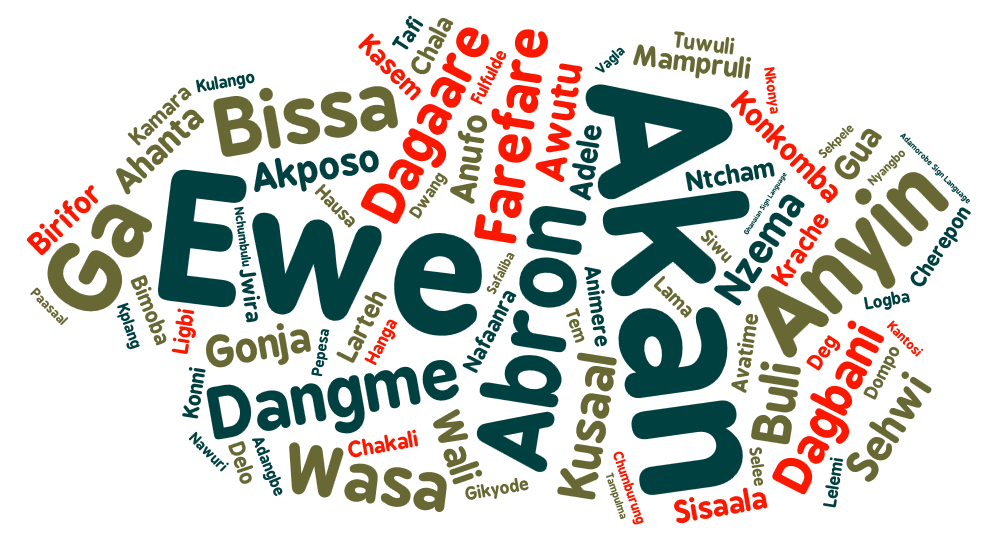 Ethnologue lists a total of 79 languages for Ghana. English is the country's official language and predominates in government and business affairs. It is also the standard language used for educational instruction. Native Ghanaian languages are divided into two linguistic subfamilies of the Niger-Congo language family.

Languages belonging to the Kwa subfamily are found predominantly to the south of the Volta River, while those belonging to the Gur subfamily are found predominantly to the north. The Kwa group, which is spoken by about 75% of the country's population, includes the Akan, Ga-Dangme, and Ewe languages. The Gur group includes the Gurma, Grusi, and Dagbani languages.

Nine languages have the status of government-sponsored languages: Akan, specifically Ashanti Twi, Fanti, Akuapem Twi, Akyem, Kwahu, Nzema; Dagaare/Wale, Dagbani, Dangme, Ewe, Ga, Gonja and Kasem. Though not an official language, Hausa is the lingua-franca among Ghana's Muslims who comprise about 16% of the population.

As OIF associated-member, French is more and more learned in Ghana's high schools.