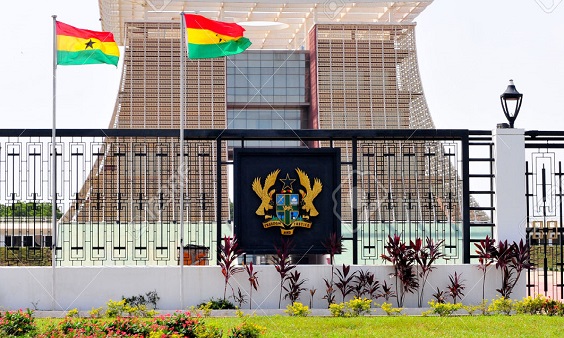 Ghana was created as a parliamentary democracy at independence in 1957, followed by alternating military and civilian governments. In January 1993, military government gave way to the Fourth Republic after presidential and parliamentary elections in late 1992. The 1992 constitution divides powers among a president, parliament, cabinet, council of state, and an independent judiciary. The government is elected by universal suffrage; however, the legislature is malapportioned, with low-population districts receiving more representatives per person than those with high populations.

There are ten administrative regions which are divided into 138 districts, each with its own district assembly. Below districts are various types of councils, including 58 town or area councils, 108 zonal councils, and 626 area councils. Sixteen thousand unit committees exist on the lowest level.

The legal system is based on British common law, customary (traditional) law, and the 1992 constitution. Court hierarchy consists of Supreme Court of Ghana (highest court), courts of appeal, and high courts of justice. Beneath these bodies are circuit, magisterial, and traditional courts. Extrajudicial institutions include public tribunals. Since independence, courts are relatively independent; this independence continues under Fourth Republic. Lower courts are being redefined and reorganized under the Fourth Republic.

Political parties became legal in mid-1992 after a ten-year hiatus. There are many political parties under the Fourth Republic; the major ones are the National Democratic Congress which won presidential and parliamentary elections in 1992, 1996 and 2008; the New Patriotic Party, the major opposition party which won elections in 2000 and 2004; the People's National Convention, and the Convention People's Party, successor to Kwame Nkrumah's original party of the same name.

Since independence, Ghana has been devoted to ideals of nonalignment and Pan-Africanism, both closely identified with Nkrumah. Ghana favours international and regional political and economic co-operation, and is an active member of the United Nations and the African Union.

Many Ghanaian diplomats and politicians hold positions in international organisations. These include Ghanaian diplomat and former Secretary-General of the United Nations Kofi Annan, International Criminal Court Judge Akua Kuenyehia, former President Jerry Rawlings and former President John Agyekum Kuffour who have both been elected chairmen of the Economic Community of West African States before.