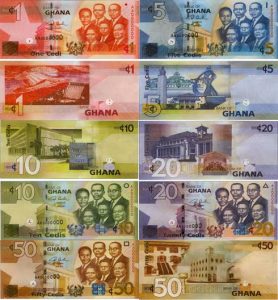 Since mid-2009, the economy has shown strong signs of stabilization. Following large expenditure slippages in 2008, both the fiscal and current account deficits were significantly reduced in the course of 2009, under the impact of positive exogenous shocks (high hydroelectric reserves with good rains, low oil prices, high cocoa and gold prices, good cocoa harvest) and significant fiscal stabilization efforts and achievements. In particular, domestically financed capital expenditures were reduced. The fiscal deficit (on a cash basis) reached 5.8 percent of Gross Domestic Product (GDP) in 2009 (against 8.5 percent a year earlier) while the balance of payments' current account registered a 3.0 percent of GDP deficit (against 10.9 percent a year earlier). Since July 2009, the exchange rate stabilized and even slightly appreciated against the US dollar (following a 45 percent depreciation in the previous 12 months). Consumer prices also broadly stabilized, growing at an annual pace of 9.1 percent over the period December 2009 to December 2010, down from the peak of 20.7 percent recorded for the period July 2008 to June 2009. By October 2010, 6-month Treasury Bills were subscribed at 12.8 percent, down from 28.8 percent a year earlier. Meanwhile sovereign bonds average maturities increased, suggesting greater investors' confidence in Ghana's medium term prospects.

After a year of fiscal stabilization in attempt to reverse the economic challenges facing the country in 2009, the government relaxed its tight fiscal stance in 2010 while ensuring that macroeconomic indicators were kept under control before the oil era.  There is the need to consolidate the achievements from 2009 and 2010 in 2011 to pave the way for establishing an appropriate framework for the designing and use of oil revenue expected in 2011. Both fiscal and current account deficits were significantly reduced, the exchange rate was stabilized and consumer price inflation decreased to single digit by end 2010. The methodology to compute national accounts was also updated, portraying a much richer economy than previously measured. But the large stock of public expenditure arrears and outstanding commitments uncovered in the second half of 2009 makes the ambitious fiscal stabilization objectives set forth in the 2011 budget much more difficult to meet, while weakening private and financial sectors, as well as utilities' operational capacities.

Rebased national accounts were published in late 2010, following a review of the underlying statistical methodology by IMF advisors. The revised data included upward revisions approaching 1 percent to recent annual growth rates, and show the 2009 level of nominal GDP as nearly 70 percent higher than earlier estimates. With the new data, GDP per capita was about US$1,100 in 2009 (formerly around $650), bringing Ghana into the lower middle-income country grouping. With the start of oil production in 2011, GDP per capita is projected to exceed $1,400. For 2010, the Ghana Statistical Services project a 6.6 percent growth in real GDP. Oil-related investment expenditures (e.g. construction, information and communication technologies, hotels, financial intermediation) and continuously favorable climatic and terms of trade conditions triggered a slight uptake in economic growth in the first half of 2010, reinforced with a moderate rebound in private sector credit growth since June 2009.

The production of oil from 2011 onwards will have a significant impact on GDP, from a national accounting perspective. But it will initially have a modest impact on households' incomes, or non oil economic activity. Indeed, job creation in the oil sector, and forward and backward linkages to non oil sectors are expected to be modest. And oil revenues not going to the budget or funds (to be invested abroad, per the Petroleum Revenue Management Law), that is, going to the consortium, will mostly be expatriated to repay capital expenditures undertaken to build the extractive capacity. The net revenue from oil  channeled to the budget, at 0.9 percent of GDP, will be insufficient to further reduce the deficit and public debt as largely offset by higher interest costs, declining grants and non-oil, non tax revenue and a public sector wage bill which would be significantly inflated by a rapid implementation of the Single Spine Salary Structure.

Oil revenues are projected to rise to about 2.5 percent of GDP in 2012 to 2013, up from about 1 percent of GDP in 2011. This is reinforced by projected efforts to boost tax effort from the non-oil economy. Disciplined expenditure management is assumed to keep overall outlays broadly unchanged in relation to GDP in 2011, notwithstanding higher interest and wage outlays and the need for a realistic provision for capital spending. Modest reductions in spending relative to GDP are projected for 2012-13.

Ghana has made significant progress in Public Financial Management Reforms in the recent years. As reported in the External Review of the Public Finance Management (ERPFM) and Public Expenditure and Financial Accountability (PEFA) reports of 2010, Ghana continues to gear itself to building a strong foundation towards achieving aggregate fiscal discipline, based on positive developments in the following areas:

Other salient improvements registered include broadened budget coverage and widened information on internally generated funds and external grants, including HIPC and MDRI grants, and submission by the Auditor General, of external audit reports to Parliament within 3 months of receipt of the draft accounts from the Controller & Accountant General's Department (CAGD), leading to more proactive and transparent oversight of public finances by the Parliamentary Public Accounts Committee. There was also progress in implementing the public procurement law, with increased coverage provided by the entity tender committees and the tender review boards and, under the auspices of the new internal audit agency law, the number of government ministries, departments and agencies that submitted internal audit reports rose.